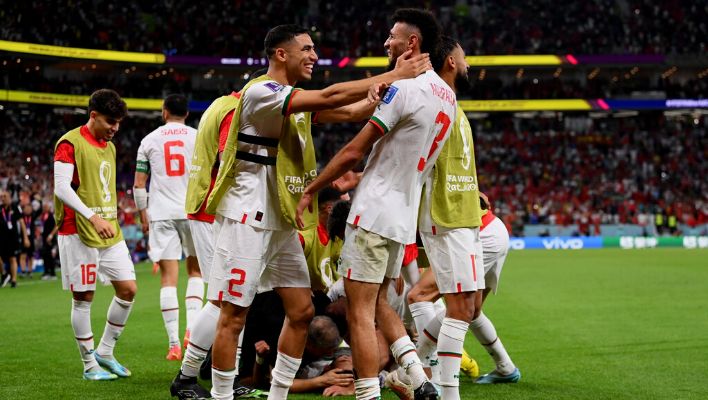 Morocco sent the latest shock waves in the ongoing World Cup 2022 in Qatar.

After Saudi Arabia and Japan pulled off huge surprise wins early on in the tournament, it was Morocco’s time to drop the upset axe.

Ranked 22nd in the world, the Barbary Lions stunned No. 2-ranked Belgium 2-0 in Group F on Sunday to stay alive in their bid to advance to the last 16.

Late goals by midfielder Abdelhamid Sabiri and forward Zakaria Aboukhlal lifted Morocco past the Belgians after they opened with a scoreless stalemate against Croatia.

Sabiri's inswinging free-kick sailed past Belgium goalkeeper Thibaut Courtois at his near post with 17 minutes to go. Sabiri's shot found Courtois napping at a set piece the second time.

Aboukhlal fired Hakim Ziyech's cutback into the roof of the net in the 92nd minute to complete the shocker as Moroccan fans went wild in celebrations at Al Thumama Stadium.

The closest Belgium came to leveling was when Jan Vertonghen headed wide before Aboukhlal sealed the victory by finishing off a fast break.

Morocco now has four points, the same as Croatia, which later on downed Canada 4-1 after fighting back from a 0-1 deficit. The results left Belgium on the brink of early elimination.

The defeat was another reminder that the generation of Belgian players that made it to the semi-finals of the World Cup four years ago is nearing the end of their halcyon days.

Michy Batshuayi was ineffective in attack and Romelu Lukaku was only good enough for a short appearance in the closing minutes.

Adding to their woes was the fact that Even Manchester City star Kevin de Bruyne failed to provide any inspiration in midfield, while at the back, veteran pair Jan Vertonghen and Toby Alderweireld were unable to match the pace of Morocco's attacks,

A place in the last 16 is what Morocco target when they take on Canada next on December 1, while Belgium seeks all the needed points as they go up against Croatia on the same day.